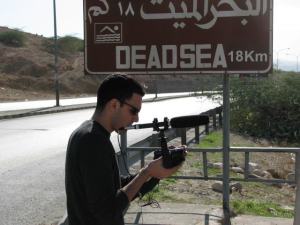 Rami Ayari is a freelance journalist who moved from Tunis to Washington DC in 2003 where he earned his Bachelors Degree in English from the George Washington University. His work as an intern covering New York based protests and developments for Al Jazeera’s United Nations bureau earned him a role as a freelancer that he still holds today. He has produced news packages on a variety of stories ranging from Palestine’s application for full UN membership the 66th General Assembly to the health effects of the 9/11 attacks on first responders.

Ayari also covered African soccer for Goal.com. During the summer of 2010, he traveled to South Africa to blog about Algeria’s participation at the first Africa-based FIFA World Cup. Ayari’s 2010 move to Brooklyn, NY, where he currently lives and works, and the recent shifts of his native Tunisia’s political landscape, have shaped his ambitions and spurred his desire for meaningful cultural contribution through video storytelling.